Life has taken another turn

Since i last posted in January our life has dramatically changed.  Bill was diagnosed with a malignant tumor in his neck and also at the back of his tongue . After many appointments he had surgery on February 28th to remove all the visible cancer cells . On march 4th we returned home with me driving in a bad storm , i hate driving in bad weather but you do whst you have to do. The next day our friend plowed us out and i asked him if he would mind turning the vehicles for me . Both vehicles are large and those who know our driveway  would understand why i asked . Well it turned out that was a really great request as just as iwas about to serve supper Bill was washing up when i heard him say "oh no" , i knew almost immediately what was happening so i ran iinto the bathroom where Bill was hemmoraging . I called 911and as is their policy they started asking questions.  I decided i didn't have time to answer nor did we have time for them to get there so i told them i was taking him myself . They said so you are ending this call , yes i replied and hung up . As quickly as possible i got Bill out to the vehicle and then i drove to the hospital as quickly as possible.  We live about 5minutes away if i was doing normal speed . We met the ambulance quite close to the hospital , apparently they must check it out anyway so my decision was right , they still had at least 4pm minutes to go .

Bill was airlifted to the hospital where the original surgery took place and subsequently spent several more days in the hospital. He is now under going radiation therapy to take care of the small cells that were not visible.

This journey had taught me so much , most importantly what is most important and the value of a loving family who came to be at our side during this very challenging time, i don't think i could have done it without them . I also learned i am tougher than i thought and can think quickly when time is of the essence.  I do think i had some heavenly guidance when i needed it most .

I don't have any quilting to share at the moment , as i am sure you understand sewing has taken a backseat for now .I did bring along some handwork this week though. 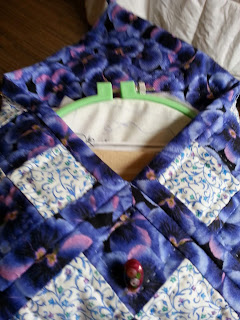 Thanks for stopping by please keep us in your thoughts  .