I have finally finished this runner , as you can see it is quite large and it was far more work than I had expected but then again I didn't know what to expect ;-) It was my first time doing rectrangles and most likely my last , just a little too much work involved for me but the outcome is quite nice so I suppose I should never say never , more like not right now .This is a Pam Bono design and her patterns are gorgeous . It sure is a great feeling to have this completed and I think the colours will be nice for Christmas which makes the finish very timely . Thanks as always for stopping by .
Sheila 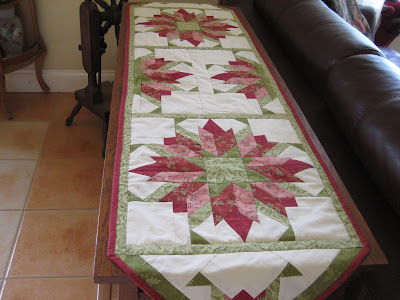 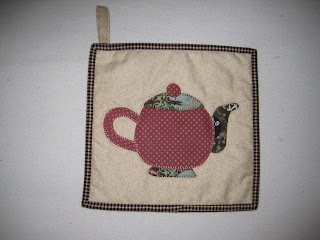 As you know I am taking part in OPAM and the reason I signed up was to try to finish some UFO's that linger around here , sometimes I wonder where they have been all these years but suddenly they appear like this little tea pot , I had appliqued this a long.... time ago at least two years and it just sat as I had no idea what to do with it , the pattern and fabrics were from a shop hop I had taken part in while visiting Seattle , sorry have no idea what shop it was but they are all very nice there . Anyway as I was starting to say I came across this applique last week and thought I should do something with it so went with the easy route and made a potholder ,even found some left over binding to use so it really took no time at all and now I can say it is no longer a UFO ;-)
The second picture is not the best but it is of a second costume I made this one is also a dog but made with very stretchy polar fleece , I thought the polar fleece would be easier to work with and I guess in many ways it was ,certainly not messy like the fluffy dog but the stretch was not fun to work with . Now we have to get it to Elise by Sat. :-(
Also if you were to look at my OPAM finishes on my sidebar you would see a Christmas exchange listed , well I can't show you that project as it has to travel a long distance and can't be opened until Nov.29th so I won't be posting a picture until after that date . 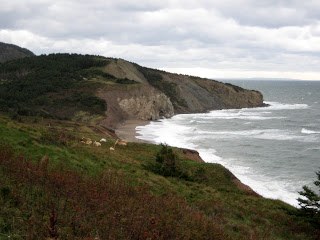 I thought the best way to show you the Fractured landscape was to first show you the photo which I used to make the landscape , it is a picture I took in Mabou Mines a week or so ago and this is my interpretation of that picture . I did some thread painting and may have gone a little over board with that but I will have to live with it . It was a fun process and I learned a few things NOT to do so overall it was a great workshop .
Thanks for stopping by.
Sheila 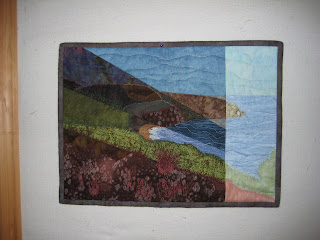 I thought I would share a few photos of other projects that were made during our weekend retreat . First off one quilter was working on this Christmas table cloth , I was amazed at the number of pins she used but she was not using a hoop so she said they were important to hold things in place ,she is a very good quilter so she obviously knows what she is doing . Next we have two of the mystery quilts , most did not get to this stage , one of these belongs to the instructor and there were lots that were in various stages of construction , isn't it a beautiful pattern .Funny one of the quilters in our fractured landscape group said if she had known what the mystery quilt was like she would have signed up for that :-) Another class was for a french braid runner , rather pretty as well and there were many beautiful colours displayed . I have my project almost finished just need to sew down the binding and then I can show you , please try not to be too critical of my thread painting when you see it as this is a whole new world to me but I must say I sure enjoyed the process and would love to do more . I'll be back later so for now thanks for stopping by .
Sheila 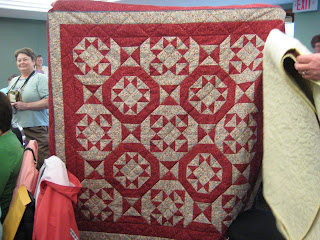 Posted by Sheila at 3:32 PM No comments:

This first photo will show you a few of the workshop group very intently watching our instructor Deb Plestid as she demonstrated some incredible ideas for free motion quilting and thread painting our landscapes as well as other quilted projects , I could have watched her all day 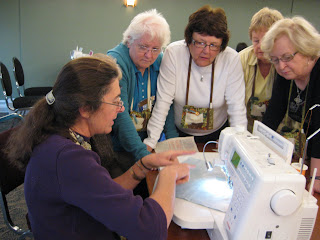 ,she made it look so easy ! In the lower picture you will see what I created for my fractured landscape , the photo that I used for the landscape is on the right and is of Mabou Mines and my interpretation of that photo in a fractured landscape is beside it , it is far from finished but with some practice on my free motion in the next little while I will tackle adding some embellishment in that manner . I will eventually share the finished project .

I will add that our weekend also included many great meals , they have an incredible chef who really does create delicious meals for all to enjoy . It was also fun to see what the other workshops were doing so I will share some of those finished projects as well tomorrow . With 80 women sewing and creating for two days the projects produced were incredible , some very impressive work .
Thanks for stopping by.
Sheila 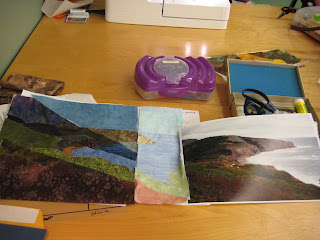 I had an absolutely terrific time on the retreat over the weekend and wanted to share just a few views out the patio doors .The Liscombe River is so pretty and if the weather had been better it would have been nice to take a walk and get some pictures of the falls but unfortunately it rained almost the entire weekend . I will post more pictures later of the class and tell you a bit about the event .So until then have yourself a great day , I have some laundry to catch up on ;-)
Sheila
Posted by Sheila at 10:29 AM 3 comments:

The final two for today ! 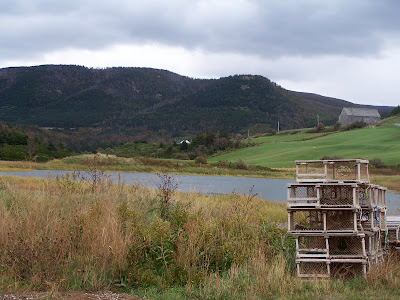 I actually did a painting of this barn many years ago .The narrow dirt road passes near the barn and continues into the mountains , note the power poles past the barn .
It was a magnificent day , the photos do not allow you to experience the cool smell of the moist salt air or the roar of the ocean . Cape Breton has many areas similar to this so this is just a small sample of the beautiful scenery on this beautiful island .

Thanks for stopping by.
Sheila 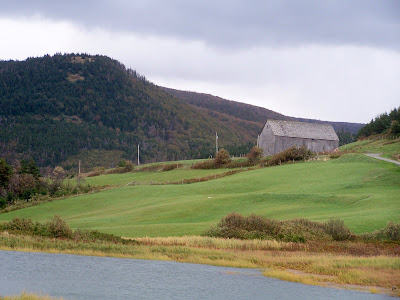 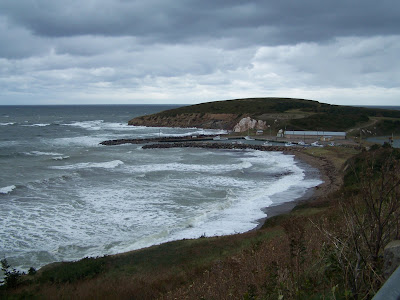 It seems that blogger will only allow four at a time so I have two more to add and will do so in a few moments. 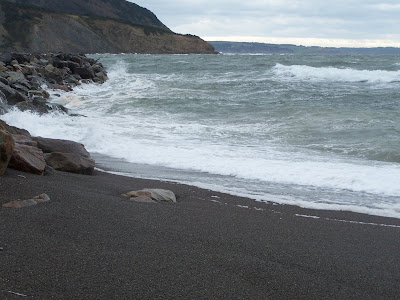 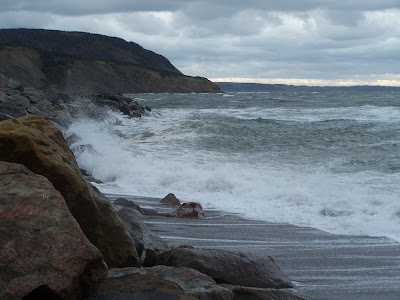 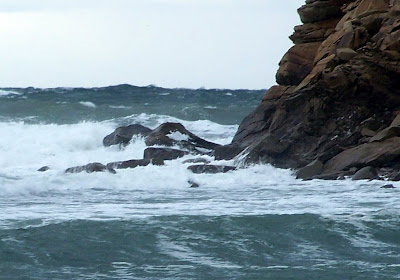 Some views of Cape Breton Island 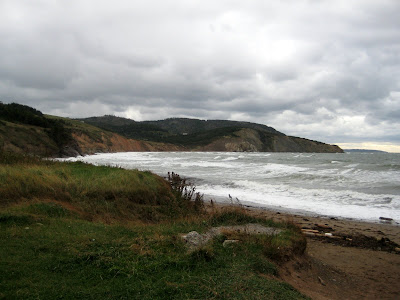 Good morning , today I am sharing more photos of my little trip to Mabou Mines in Cape Breton Island ,. It was a very overcast day with rain at times and as you will note the ocean was rather fierce and believe me it was COLD , that wind was really raw and a winter parka would have felt real good ;-) I can see that Blogger is not going to allow me to add all I had set so will post more later .I hope you enjoy these views . 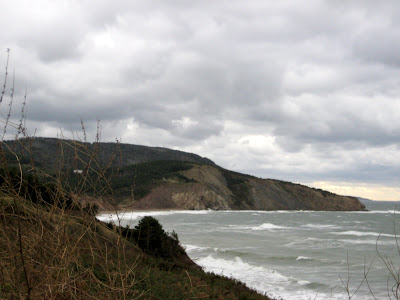 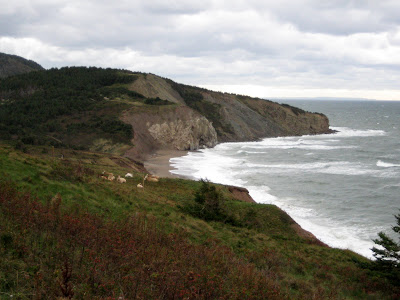 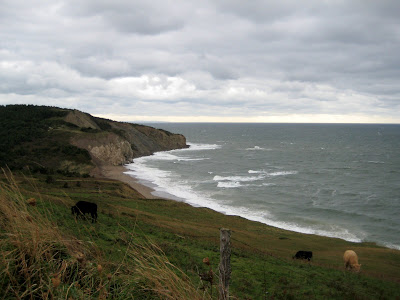 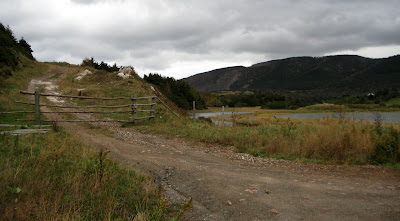 I had the good fortune today to visit Cape Breton Island and this photo was taken in a place called Mabou Mines , a dirt road takes you down about 10km. to a wharf .I will share more pictures of this area with you tomorrow , the contrast of the ocean and the mountains is spectacular . I hope to make some landscape quilts from my pictures today and I love the fact the skies were gray and overcast it just brings out the colours in the mountains so much better . What do you think ?? I promise the pictures tomorrow are even more impressive . Thanks for stopping by .
Sheila 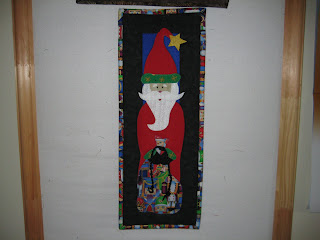 The quilt guild I am a member of gave us a Christmas challenge at the September meeting . The rules were to use the fabric provided somewhere in the project and to use a book or magazine from our guild library and then present the finished project at our December meeting . So you probably are wondering what fabric was provided , well the answer is the fabric I used for Santa's bag as well as for the binding . This project is a design by Kim Van Rossum of Harbour Quilts here in Nova Scotia and was in the Canadian Quilter magazine in the winter 2007 issue . The pattern should have been enlarged by 50% but since my printer doesn't have that feature I decided to go with the smaller size using the pieces as they were in the magazine and this is the result .Nice to have that finished well before the deadline ;-) As always thanks for stopping by for a visit , I appreciate it so much .
Sheila 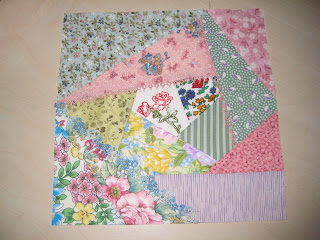 This weeks block has a center embroidery made by Betsy of quilting fiesta .She kindly made me three little stitcheries to use for my blocks and they sure do make them pretty . Thanks so much Betsy :-) I added some antique tatting , you may have trouble seeing it here , the pink in particular is very tiny but oh so pretty and delicate , the blue is two shades of blue and is a little larger and again is so very pretty , I love tatting , have no idea how they do it but it is gorgeous . Thanks for stopping by and have yourself a wonderful day .